LITTLE ROCK — The idea that size matters in sports, maybe more so in basketball than many other athletic endeavors, is nothing new.

Winning and success are not guaranteed, though, just because you’re bigger than your opponent. It’s not as simple as that, because skill, athleticism, and other tangibles play into the success of players and teams, but if you can combine size (including length) with skill and athleticism then you’re on to something.

It seems as though fourth-year Arkansas coach Eric Musselman has pushed all his chips — a.k.a his big-in-more-ways-than-one class of 2022 recruiting haul — to the center of the poker table, betting that his best collection of size, length, skill, and athleticism since coming to Fayetteville will provide the firepower needed to return the program to the NCAA tournament Final Four for the first time in 28 years.

A year removed from spring recruiting that was laser-focused on putting together a small-ball roster for the 2021-22 season, and perhaps informed by ’21-22 NCAAT matchups against the big frontlines of Gonzaga and Duke, Musselman retooled the current ’22-23 roster with 11 newcomers among the 13 on scholarship that not only offers more 6-9 or taller frontline options (four) than his previous three Hog teams had, but in the backcourt there is more size and length as well. Add athleticism (in some cases elite) and high court IQ’s into the mix, and Musselman’s genius might be poised to ascend to greater praise from his team’s fanbase.

Musselman posted a graphic to Twitter on Sunday, July 3, revealing that his Hoop Hogs’ average height (6-6.3) and average wingspan (6-10.7) were greater than the average NBA team (6-6.1 and 6-10.6). It’s obvious Musselman’s 2022 recruiting was designed to get bigger and longer, and the next part is speculation, but he very well may have intentionally grown his roster to out-size the average NBA team. As a matter of optics, something Musselman understands and strives to dictate the course of, it makes sense that he’d purposely do that.

So let’s drill down a bit more on what winning the size arms-war means as Arkansas prepares not only for a fast-approaching four-game summer exhibition tour in Europe but also for what looks to be the most challenging regular-season schedule (both non-conference and SEC play) for the program in years.

It starts with Baylor. Yep, the juggernaut small-ball national championship winners in ’20-21 put down the game Hogs in the Elite Eight en route to winning that title, prompting Musselman to quickly mine the transfer portal for ‘tweeners standing 6-6, 6-6, and 6-6 plus a 5-7 shooting guard. Big difference between Baylor’s ’20-21 small-ball lineup and Musselman’s offering in ’21-22 was a noticeable gap in ball-handling, shot-creation, and three-point shooting skill.

Nonetheless, the Hogs ironed out some late December / early January problems as Musselman tweaked his 7-player rotation that saw significant strides on the defensive side of the ball. But aside from being adept (and elite) at getting to the free throw line and converting (more on free throws later), the smallish Razorbacks were more about stingy defense and consistent plus-rebounding with figure-it-out-as-you-go offense. The Hogs were blue-collar gritty, and that paid off with a second-consecutive Elite Eight run despite a lack of shooting and consistent floor leadership on offense with a lack of overall size on the frontline.

The look-back to last season serves as a marker for Musselman’s mostly small-ball philosophies in his first three seasons at Arkansas. When factoring in that departed Jaylin Williams at 6-10 was the only Razorback standing taller than 6-7 to see a consistent rotation role (and he played in only two of the last three campaigns), it’s obvious where Musselman’s mind was in engineering his vision for winning. Smaller lineups designed to tilt enough matchups in the Hogs’ favor while doing just enough to overcome the shortcomings of being, well, short. Williams was terrific, an all-time great big man at Arkansas and one of the best both-ends fixers in the college game, but it never felt like the Hogs had enough frontline pieces to go all the way.

Not knocking that approach, because again, aside from some aforementioned mid-season speed bumps it worked out to mostly exceed expectations as Musselman tweaked his rotations while syncing those personnel choices masterfully with pre-game preparation and in-game adjustments to the tune of the best overall record in the SEC (includes best mark against league teams), consecutive final national Top 10 rankings, and those back-to-back Elite Eights.

But everybody wants more. Hog fans do, and you know Musselman does. And that’s why he’s taken the next steps to build a true matchup monster (a.k.a matchup versatility) on his roster.

With the current team, that championship-caliber feeling IS there if only looking at the exceptional collective size, length, skill, and athleticism combined with high court IQs that helped make that 11-player incoming class the No. 1 recruiting haul in the nation. With 6-3, 6-4, 6-5, 6-5, 6-6, 6-6, 6-7, 6-7, 6-7, 6-9, 6-9, 6-10, and 6-10 there is plus-positional size across the board. You’ve got roughly a handful of players with a 7-0-plus wingspan, and just using one example in the backcourt, the No. 1 incoming high school recruit in the country Nick Smith, Jr., has a wingspan of 6-9-plus on his 6-5 frame. The options are there for Musselman to operate with a four-guard/wing and one-big lineup, or he can go more traditional three-guard/wing and two-bigs lineup, or even run out two guard/wings and three frontliners if he’s so inclined.

There’s enough skill versatility in some of those frontline pieces to allow Musselman to go in just about any direction he wants, even if he chooses not to stray too far (if at all) from his tight 7-8 player rotation.

Team chemistry, buying into roles, and rotation functionality are always a what-if going into a preseason, especially with 11 newcomers. BUT …

Defending at the rim and finishing above it should be a team strength for once, and for a system that produces elite results in free throws attempted and free throws made relative to the rest of Division 1 — the Hoop Hogs finished first in both categories last season — being bigger and longer would seem to at least aid in next season’s endeavor to once again achieve elite FTA results. Even if three-point shooting is no better in the coming season than it was last year, it just feels like this group will find it easier to score in in the halfcourt, and certainly in transition.

But maybe the most important thing emerging so far from Arkansas’ limited practices is that Musselman already likes what he sees defensively. If there has been any identity of his Arkansas program to this point, it’s been on defense. Except we know it has taken time — again, mid January after rocky SEC starts the past two seasons — to iron out things on that side of the ball to help everything else fall into place.

So for Musselman to feel good about it this early when players are still learning terminology, positioning, timing, footwork, how to communicate, etc., it tells you that the size, length, athleticism, and floor IQ are so collectively good that even the Head Hog has gotten excited in June and July with four more months before the start of the regular season.

Plenty of time for him to build, mold, and shape his ’22-23 matchup monster … a big one with athleticism, skills, and a high IQ. 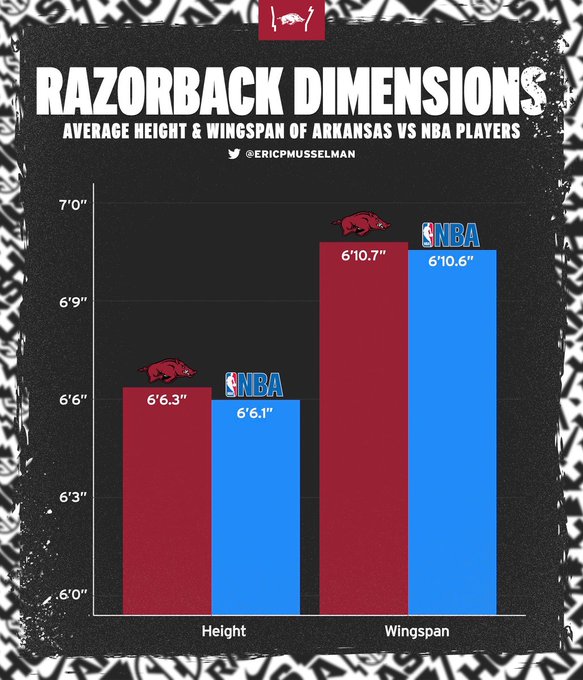 – Arkansas sophomore Trevon Brazile @trevonbrazile2 went full-cycle wash, wax, & rinse at the rim here … came out squeaky clean on the other side!

Arkansas sophomore Trevon Brazile @trevonbrazile2 went full-cycle wash, wax, & rinse at the rim here … came out squeaky clean on the other side! https://t.co/kklEKD2tWc

– Devo pickin’ & choosin’ on his way to a cup finish! Arkansas jr guard Davonte Davis @MrDevoBuckets uses his body as a shield thru stop-&-go action as a driver (practice clip credit to UA men’s basketball) …

Devo pickin' & choosin' on his way to a cup finish! Arkansas jr guard Davonte Davis @MrDevoBuckets uses his body as a shield thru stop-&-go action as a driver (practice clip credit to UA men's basketball) … pic.twitter.com/YJvyxiJ603

– Most underrated part of Arkansas freshman Joseph Pinion’s @josephpinion2 gm that I talked about frequently is his plus-passing skill, & how about Lawson Blake @_lawsonblake_ not reacting to potential contact or challenge at rim as he finishes strong in roll-&-catch (clip via Synergy/UA hoops)

Most underrated part of Arkansas freshman Joseph Pinion's @josephpinion2 gm that I talked about frequently is his plus-passing skill, & how about @_lawsonblake_ not reacting to potential contact or challenge at rim as he finishes strong in roll-&-catch (clip via Synergy/UA hoops) pic.twitter.com/Bao7001mei

* Razorbacks recruiting: The first week of July was one of the busiest for Arkansas’ coaching staff in recent memory.

Next, assistant coaches Gus Argenal and Keith Smart were dispatched to watch recruits compete during the first July live-evaluation period (July 6-10) — Argenal to Kansas City, Mo., for Nike EYBL session four, and Smart to Rock Hill, S.C., for the Adidas 3SSB Summer Championships. Ruta left Spain and stopped in Georgia for the Under Armour Association event before joining Argenal in Kansas City, while Musselman took in games on Friday and Saturday in K.C.

For all the first July live-eval period details — analysis; the who, where, and when Hog coaches were watching; game results; stats; video highlights; and more — click the link to my Hogville.net article: https://forums.hogville.net/index.php?topic=744102.0

* Pro Hogs busy in early July, too: Former Arkansas star big men Bobby Portis and Jaylin Williams both came to terms on new NBA contracts — Portis signing his third deal with the Milwaukee Bucks (reported to be a 4-year, $49 million contract), and Williams inking his rookie contract with the Oklahoma City Thunder (reported to be a 4-year, $8.2 million deal). For a more detailed breakdown of both, see my Pig Trail Nation zoom segment linked at the top of page, as well as this linked Hogville.net article for a more in-depth look at Portis’ deal: https://forums.hogville.net/index.php?topic=743943.0

Moody (a 34-point outing, so far tops in summer league single-game scoring) and Joe (a 24-point game partly on 7-of-9 shooting from 3) have been stars in summer league play while Williams, Jones, Umude, and Smith have each had some positive performances to date.