FAYETTEVILLE – The Southeastern Conference released the men’s basketball conference opponents for the 2022-23 season on Wednesday. The Razorbacks will play five teams both home and away including Alabama, Kentucky, LSU, Missouri and Texas A&M.

Times, dates and television information will be announced at a later date. 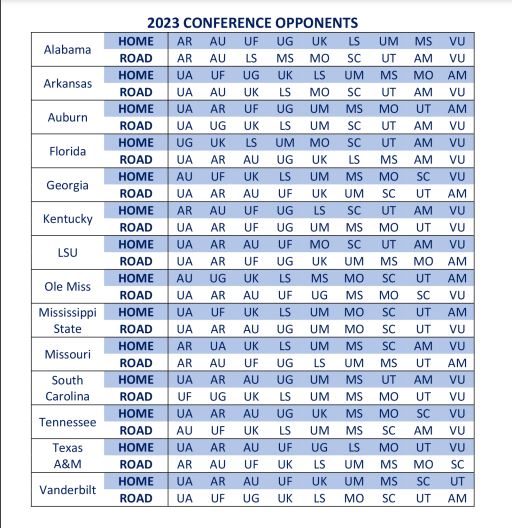 ·   This season will be just the second time since the Razorbacks joined the SEC (1991-92) that the Arkansas and Kentucky will meet twice during the same regular season. The only other time came in 2013-14 when Arkansas swept Kentucky with a pair of overtime victories. First, Arkansas beat #13 Kentucky in Fayetteville (Jan. 14, 2014). Then, the Razorbacks handed the 17th-ranked Wildcats a 71-67 setback in Rupp Arena (Feb. 27, 2014).

·   Arkansas and Missouri will be playing a home-and-home series in each of the now 11 years since the Tigers joined the SEC (2012-13).

·   Arkansas and LSU have met for a home-and-home series in all but two seasons since the Razorbacks joined the SEC (1991-92). The Razorbacks and Tigers only met once in 2013 (at Baton Rouge) and just once in 2015 (in Fayetteville).

·   Arkansas and Texas A&M will be scheduled to play a home-and-home series for the ninth time in the now 11 years since the Aggies joined the conference. The teams played twice in the Aggies’ inaugural season in the SEC (2012-13) and only met once in 2014 and 2015. The teams have been scheduled to play twice each regular season every year since the 2015-16 season. Note: the teams only played once in 2020-21 due to COVID.

·   Arkansas and Tennessee will only play once in 2022-23, marking the fifth time over nine years the schools will have a single-game series. Four of those five have one thing in common … being played in Thompson-Boling Arena (2023, 2021, 2019 and 2017). Since 2013-14, Arkansas will be playing in Knoxville for the ninth time as compared to five meetings being played in Fayetteville and two at the SEC Tournament.

·   On the other end of a scheduling quirk, Arkansas will play at Vanderbilt for just the fourth time since 2014-15. Over the last 12 meetings with the Commodores, seven have been at Bud Walton Arena, three have been at Vandy’s Memorial Gym and two have been in Nashville’s Bridgestone Arena for the SEC Tournament.

As a reminder, the deadline to renew your basketball season tickets is Thursday – June 30. Season ticket holders can renew online now by logging on to their ticket account or contacting the Arkansas Razorback Ticket Center by email raztk@uark.edu or phone at 800-982-4647 (HOGS).