The Arkansas-Texas A&M football rivalry: A Look Back

FAYETTEVILLE, Ark. (KNWA/KFTA) — The Arkansas Razorbacks and the Texas A&M Aggies dubbed their football rivalry “The Southwest Classic” when they began facing off on the Dallas Cowboys’ home turf in Arlington in 2009.

But as fans know, the heated battles between these two schools go back much further than that—well over a century, in fact. Let’s take a closer look at the long and storied history of this epic rivalry.

The teams first met on the gridiron way back in 1903, and battled again in 1910 and 1912. Both schools became members of the Southwest Conference (SWC) in 1915, but didn’t meet again until 1927. The Aggies took three of the first four meetings, then Arkansas reeled off seven undefeated matchups–six wins and a 7-7 tie in 1934.

Following that stretch, Texas A&M became a national power, and that was reflected in how they fared against the Hogs for several years. The Aggies took six straight, from 1938-1943, with Arkansas getting shutout in the final five contests. A&M was named the college football National Champions in the Associated Press writers’ poll for the 1939 college football season. 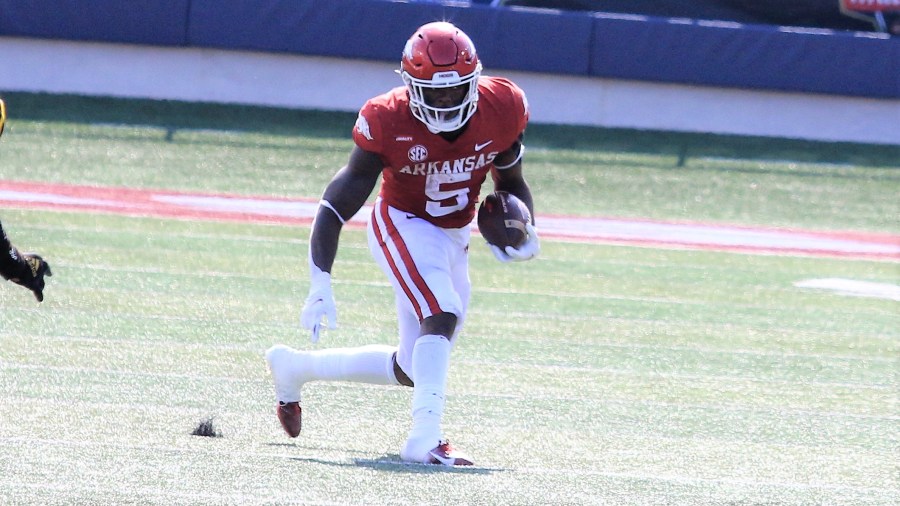 The Hogs turned the tide back in their favor in the mid-1940s, with seven wins and a pair of ties during a stretch of a dozen games through 1955. The Aggies managed a pair of wins in 1957 and 1958, but the Razorbacks fought back and owned the rivalry for nearly a decade.

Twenty-five years after Texas A&M won in a shutout during a championship campaign, the legendary 1964 Razorbacks squad returned the favor, winning 17-0 under head coach Frank Broyles during the Hogs lone national title season to date. The Razorbacks steamrolled the Aggies by a combined 82-0 margin in 1964, 1965, and 1966.

The late 1960s and early 1970s were more competitive, with the schools splitting the next ten meetings. The 1975 contest was the first that saw both teams ranked, and the #18 Razorbacks put an end to the #2 Aggies undefeated season with a 31-6 shellacking at War Memorial Stadium in Little Rock.

The late 1970s and early 1980s were dominated by the Hogs, perenially a Top 20 team at that point. They won six straight, from 1977-1982. Another nine-year stretch of parity followed that, with Texas A&M winning five games and Arkansas winning four through 1991—Arkansas’ final year in the SWC and the last meeting between the schools in the 20th century as the Razorbacks joined the Southeastern Conference (SEC). 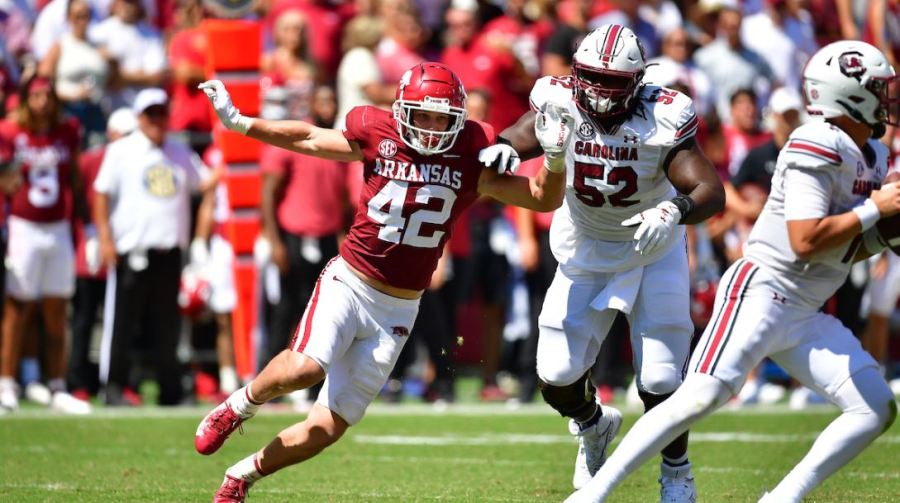 Drew Sanders is among the national leaders in tackles, sacks, and forced fumbles.

The series was renewed in 2009 and was named “The Southwest Classic.” It was originally planned as an annual non-conference tilt to take place at the opulent Cowboys Stadium in Arlington, Texas. But those plans changed when the Aggies joined the SEC.

The Hogs orchestrated a thrilling comeback in 2011, coming from 18 points down to edge the Aggies as Hogs fans displayed “Welcome to the SEC” signs in the stands after the conference change announcement had been made. But the following year, A&M began a nine-year winning streak, with three victories coming in overtime.

Coach Pittman’s Hogs snapped that skein in 2021 with a 20-10 victory at Jerry’s World (now officially known as AT&T Stadium), en route to a nine-win season that culminated with a 24-10 win over Penn State in the Outback Bowl.

Below are some notable Arkansas single-game leaders for the Southwest Classic:

The #10 ranked Hogs will look to turn it into a two-game rivalry winning streak on Saturday night in Arlington. Coverage starts at 6 p.m. on ESPN.